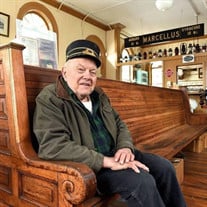 Albert J. Kallfelz, Jr., 85 of Camillus passed away Tuesday at home following a long illness. Born in Syracuse, he graduated from Smith Technical High School and Syracuse University's College of Engineering. During and after his college years, Al served in the New York National Guard. His family owned the former Kallfelz Brothers Baking Company, one of the largest commercial bakeries in upstate New York. He was a communicant of St. Joseph’s Church in Camillus. After graduation, he worked at Smith Corona as a mechanical engineer, and shared some patents on typewriter design. When the company moved to Cortland, Al joined Carrier Corporation, where he spent the rest of his career. At Carrier, Al shared several more patents on machines that built air conditioners. As a boy traveling with his parents on business and pleasure trips, Al developed a life-long interest in railroads. That passion led to his membership in the Central New York Chapter of the National Railway Historical Society. Except for a brief interval, he served as chapter president for more than 50 years, possibly making him the longest serving leader of a NRHS chapter. He was instrumental in the Central New York Chapter’s purchase in 1966 of Martisco Station in the Town of Camillus from the New York Central Railroad, and worked tirelessly on the station museum since. In addition, he offered encouragement and guidance as a mentor to generations of young train enthusiasts over the years. For many years, Al was an Emergency Medical Technician with WAVES Ambulance. He had been a caregiver to his mother in her later years. A special memory for Al was his 1994 trip to his family ancestors’ homes in Germany. He was predeceased by his parents Albert and Theresa Kallfelz. Survived by cousins, Carl J. Batcharie Jr. and wife Calista, Marlitia Mrotek and husband Paul, Elizabeth Kaufmann and husband Bill; eight 3rd cousins; and his Railroad family. His big heart was filled with encouragement for the next generation of train enthusiasts and it will be sorely missed. Private services will be held at Assumption Cemetery, Syracuse. A celebration of his life will be held at later date. Arrangements by B.L. Bush & Sons Funeral Home, 10 Genesee St. Camillus, NY 13031. Contributions in his memory may be made to CNY Chapter, NRHS Inc., PO Box 229, Marcellus, NY 13108 or online at www.cnynrhs.org Please sign his guestbook at www.BLBUSH.com

Albert J. Kallfelz, Jr., 85 of Camillus passed away Tuesday at home following a long illness. Born in Syracuse, he graduated from Smith Technical High School and Syracuse University's College of Engineering. During and after his college years,... View Obituary & Service Information

The family of Albert J. Kallfelz Jr. created this Life Tributes page to make it easy to share your memories.

Albert J. Kallfelz, Jr., 85 of Camillus passed away Tuesday at...

Send flowers to the Kallfelz family.