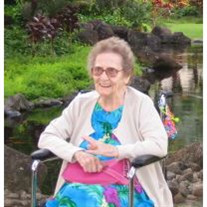 Alma W. Perry, 86, former resident of Fairmount, NY, died peacefully March 27th at the Fort Hudson Nursing Center with her daughter Bonnie at her side. She was the daughter of Ralph and Elizabeth Whedon, and beloved sister of Ellen Louise Rives and wife of Charles W. Perry, all of whom preceded her in death. Alma was an avid reader and one of the founding members of the Fairmount Community Library. For 35 years Alma volunteered her services at the local E.C. H.O. Meals on Wheels program, initially cooking in her kitchen and eventually coordinator of cooks. She loved her Yankees, playing cards, and watching golf, especially her favorite, Freddie Couples. She is survived by three children, Steven R.C. Perry of Lihue, Kauai; Judith Ellen Kennedy of Westlake, CA; and Barbara “Bonnie” Kopp and husband Rick of Queensbury, NY, as well as a special “son” Dr. Douglas Provost of Glens Falls, NY. She was a loving “Grammy” to nine grandchildren and four great-grandchildren: Kimberly Lanam of Santa Clara, CA, with Jeff and Trisha; Tara Provost of Gerlach, NV; Jason Provost of Denver, CO; Brooke Provost Meaghan (Mike) of Denver, CO; Bowen Provost of Westlake, CA; Hathaway Norman (Charlie) with daughter Adele of Boston, MA; Derek Lott of Saratoga, NY; Ryan Lott (Christina Graves) with daughter Jordyn of Queensbury, NY; and Aaron Lott of Eugene, OR. She will be missed by her nieces and nephews, Meribeth Rives and her son Christopher Venezia, Leslie and Brad Hyre with Elissa and Shane, and Douglas and Carol Rives with Michael, Bethany and Chelsea. Per Alma’s wishes, there will be no calling hours. A memorial service will be held in May. In lieu of flowers memorial contributions can be made to the Fairmount Community Library, 406 Chapel Drive, Syracuse, NY 13219, or Syracuse Habitat for Humanity, Inc., 308 Otisco Street, Syracuse, NY 13204. The family of Alma Perry would like to publicly thank the wonderful staff at Fort Hudson Nursing Center, especially those on G Wing, for their loving and conscientious care during the past several months. You are all truly angels. Arrangements by B.L. Bush & Sons Funeral Home, Camillus. Please sign her guestbook at www.BLBUSH.com

Alma W. Perry, 86, former resident of Fairmount, NY, died peacefully March 27th at the Fort Hudson Nursing Center with her daughter Bonnie at her side. She was the daughter of Ralph and Elizabeth Whedon, and beloved sister of Ellen Louise Rives... View Obituary & Service Information

The family of Alma (Whedon) Perry created this Life Tributes page to make it easy to share your memories.

Send flowers to the Perry family.