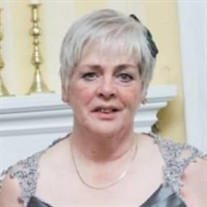 Barbara R. Allen, 69, of Baldwinsville, passed away Thursday, September 9th following a recent diagnosis of cancer. Born in Staten Island to Raymond and Joyce Rowan, she graduated from Curtis High School in 1969. She received an Associates of Nursing from the College of Staten Island in 1971 and a Bachelors of Psychology in 1982. Barbara was the head nurse of the NICU at Staten Island Hospital for several years. As a young woman she was an avid traveler, spending time in Europe, the Caribbean, and Mexico. She married the love of her life, Jack, on June 6th, 1981, and they spent forty happy years together. Barbara and Jack moved to El Cerrito, California, in 1988, and then to Baldwinsville in 1990, making lifelong friends wherever she went. Barbara had a deep love of nature and was drawn to water and the sea. As a child, she spent summers at Cranberry Lake in Connecticut and at Greenport on the North Shore of Long Island. After moving to Baldwinsville, she spent hours taking walks along the Seneca River, making careful note of weather and animal activity from day to day. May happy hours were also spent walking the trails at Beaver Lake Nature Center. This love of the natural world led her to the Ikenobo School of Ikebana (Japanese flower arranging), which she studied for many years, eventually earning a first level teaching certificate. Barbara was a true correspondent, in the traditional sense of the word. She was well known for her handwritten letters, which connected friends and family far and wide over many years. Occasionally, she would also write short stories and poetry. In her later years, she enjoyed joining her daughters in their activities, attending anime and comic conventions and Renaissance fairs with them and their friends. She taught an Ikebana workshop at Ohayocon in Columbus, Ohio, from 2009 – 2013. She has cosplayed at each convention she attended, to great acclaim. She is survived by her husband, Jack; her daughters Heather (Justin) Schroeder of Harrington Park, NJ, and Kelsey Allen of Trenton, NJ; her sisters Sean (Kevin) Hanly of Brownsville, VT, and Margaret Rowan of Staten Island; her mother Joyce Rowan of Staten Island; nieces Alexandra, Melissa, Samantha, and Andrea; nephews James, Liam, Stephen, Daniel, and Connor; and many children that she informally adopted along the way. Calling hours will be Friday, September 17th, from 5 to 8 pm at B.L. Bush & Sons Funeral Home, 10 Genesee St., Camillus. A funeral service will be held Saturday, September 18th, at 2 pm at Grace Episcopal Church, 110 Oswego St., Baldwinsville. A memorial service will be held on Staten Island at a later date. The family would like to thank the amazing medical staff at Hematology Oncology Associates of CNY and St. Joseph’s Hospital, for their unending kindness and care during this time. Contributions may be made to PEACE, Inc., 217 South Salina Street, 2nd Floor, Syracuse, NY 13202 or online at https://peace.charityproud.org/Donate Please sign her guestbook at www.BLBUSH.com

Barbara R. Allen, 69, of Baldwinsville, passed away Thursday, September 9th following a recent diagnosis of cancer. Born in Staten Island to Raymond and Joyce Rowan, she graduated from Curtis High School in 1969. She received an Associates of... View Obituary & Service Information

The family of Barbara R. Allen created this Life Tributes page to make it easy to share your memories.

Send flowers to the Allen family.