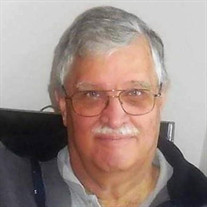 Donald A. Bausman, Jr., 70, of LaFayette passed away at home on May 19th 2021 with his family by his side and with the knowledge that his Lord is waiting for him. Born in Shreveport, LA to Donald and Frances (Sehl) Bausman, he graduated from Solvay High School in 1968 and Eastern Nazarene College in 1973 with a BA in History. Shortly after graduation, he began his career at the U.S. Postal Service where his jobs included mail handler, city carrier, rural carrier, Supervisor and the for the last 20 + years, Rural Customer Service Analyst. As much as Don was committed to work and enjoyed serving on church committees, his main focus was his family and raising his two children. As life would have it there were times of struggle, but it was always a huge blessing. Don’s faith led to his commitment to his church and the church family. Over the years, his involvement in Christ Community Church consisted of serving on many committees and leadership positions including church board and church treasurer. On a district level for the Nazarene denomination, he served on many committees as well as former camp treasurer and district treasurer. In addition, he served one four-year term on the ENC Board of Trustees. Recently, the joy of his grandchildren has lit up his life. He was predeceased by his brother Ralph in 1990, his father Donald in 2013 and his mother Frances in 2018. He is survived by his wife of 41 years Janet (Walden); his two children, Jill (Sean) Works and Travis Bausman; grandchildren Gabby, Arabella and Giavanna Works; and his brother Marty (Julia) Bausman of Waynesburg, PA. Calling hours will be Tuesday, May 25th from 5 to 8 pm at B.L. Bush & Sons Funeral Home, 10 Genesee St., Camillus. Services will be Wednesday, May 26th at 11 am at Christ Community Church of the Nazarene, 3644 Warners Rd, Syracuse, NY 13209. Burial will be in Woodlawn Cemetery, Syracuse. Contributions in lieu of flowers may be made to Christ Community Church. Please sign the guestbook at www.BLBUSH.com

Donald A. Bausman, Jr., 70, of LaFayette passed away at home on May 19th 2021 with his family by his side and with the knowledge that his Lord is waiting for him. Born in Shreveport, LA to Donald and Frances (Sehl) Bausman, he graduated from... View Obituary & Service Information

The family of Donald A. Bausman Jr. created this Life Tributes page to make it easy to share your memories.

Send flowers to the Bausman family.