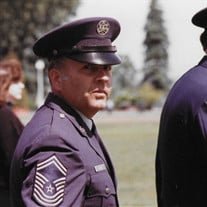 Donald Vernon Sykes, 73, of Baldwinsville went to be with his heavenly father on Monday, March 26, 2018. Donald was born in Gouverneur, NY on October 11, 1944 to the late Milton “John” and Edna (Hurley) Sykes. He grew up in the Fine, NY area and attended Clifton-Fine Central in Star Lake. After graduating in 1963, he enlisted in the Air Force as a nuclear weapons specialist then in 1966 he graduated from the joint-service Explosive Ordinance Disposal School in Indian Head, MD. He saw overseas duty in Germany, Taiwan, Korea, Quebec, and Alaska as well as stateside service in MA, NY, NM, MI and WA. He retired in 1990 as a CMSgt. He then worked for several years at a senior apt. complex in Keeseville, NY before moving to Baldwinsville. He enjoyed hunting and serving his Lord. He served not only his church, but also the Upstate NY District Church of the Nazarene. He is survived by his wife Irene whom he married in 1969 in Frankfurt, Germany. His daughter Tonya (Darryl) of Baldwinsville; his five grandchildren; Hanna, Emmie, Adianna, Mirijam, and Noah; his brother Claude (Christine) of Baldwinsville; a sister Judy (Phillip) Maybee of Ortonville, MI; half-sister Carol Ciulla of Ronhonkoma, NY; several nieces and nephews. Calling hours will be held Saturday, March 31st from 10 to 11:30 am followed by a service at 11:30 am at Christ Community Church, 3644 Warners Road, Syracuse. Burial will be in Woodland Cemetery, Fine, NY. In lieu of flowers, donations may be made to Upstate NY District Church of the Nazarene, P.O. Box 258, Clay, NY 13041. This donation will support missions in the area that were important to Don. Arrangements by B.L. Bush & Sons Funeral Home, Camillus. Please sign the guestbook at www.BLBUSH.com

The family of Donald V. Sykes created this Life Tributes page to make it easy to share your memories.

Donald Vernon Sykes, 73, of Baldwinsville went to be with his...

Send flowers to the Sykes family.