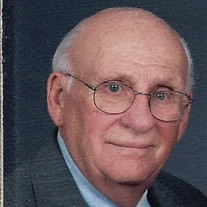 Edwin Richard Smith, 93, of Fairmount passed away peacefully on February 4,2019. Dick was born on June 25, 1925, he graduated from Brighton High School in 1943 and served in the US Navy during WWII. He graduated from MIT with a degree in Naval Architecture and Marine Engineering and earned an MBA from the University of Rochester. He started his career at Ernst & Ernst, CPAs, worked many years at E.W. Edwards & Son department store, was a self-employed CPA, and worked for Green & Seifter, CPAs until his retirement. Dick served on several boards including Blue Cross, the Credit Bureau, the Better Business Bureau and Greenlawn Cemetery. He also served his golf and bowling leagues, the Fairmount Library and Fairmount Community Church, where he was an active member for many years. A big sports fan, he particularly enjoyed watching SU sports. He is predeceased by his brothers Donald K Smith, Douglas Vair and Donald Vair, sister-in- law Barbara Vair, and son James D Smith. He is survived by his wife of 67 years, Patricia Lindeman Smith; sons Thomas R (Susan) Smith, Robert K (Barbara) Smith and daughter Sharon L. (Carl) Kieper; grandchildren Nathan (Megan) Kieper, Paul (Tara) Kieper, Kathryn Kieper, Alexandra Smith, Timothy Smith, Sarah (Mike) Kukesh, Jessica Smith, and Samantha Smith; great grandchildren Emily, Lily and Hailey Kieper and Emma Kukesh ; sister-in-law Elizabeth Smith and brother-in-law Robert Lindeman. He is also survived by many nieces and nephews. He will be remembered for his faith, his positive outlook and his sense of humor. Most of all he’ll be remembered for his great love for his family. Calling hours will be 6 to 8 pm, Friday, February 22 at B.L. Bush & Sons Funeral Home, 10 Genesee St., Camillus. A service will be held 10 am Saturday, February 23 at Fairmount Community Church, United Church of Christ, 126 South Terry Road, Syracuse. In lieu of flowers donations may be made to the Alzheimer’s Association of CNY, 441 West Kirkpatrick St., Syracuse, NY 13204 or the Fairmount Community Church Endowment Fund. Please sign his guestbook at www.BLBUSH.com

Edwin Richard Smith, 93, of Fairmount passed away peacefully on February 4,2019. Dick was born on June 25, 1925, he graduated from Brighton High School in 1943 and served in the US Navy during WWII. He graduated from MIT with a degree in Naval... View Obituary & Service Information

The family of E. Richard Smith created this Life Tributes page to make it easy to share your memories.

Send flowers to the Smith family.