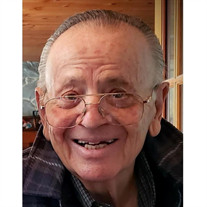 George J. Scandale, beloved father and husband, went home to be with the Lord on October 28, 2021. He was a long time resident of Northampton, MA until his recent move to Camillus, NY where he spent his days surrounded by his family, exploring new areas, and making new friends. George’s parents, Mike and Jenny, owned and operated the popular Mayflower restaurant, in his hometown of Northampton, Mass., where at times, as a young man, George would help as a short order cook. George had a successful career, with the State of Massachusetts, and retired after 33 years of service. George was passionate about his love for horses, specifically thoroughbreds. His love for horses brought him to spend a tremendous amount of time training, working in the stables, and caring for several horses in addition to owning and racing many of his own. He took great pride in all that he had to offer, when it came to their care. Some would say, “He had the magic touch!” George also loved to feed the deer that gathered in his back yard, and would be sure to tell others that they were “God’s children.” He was a kind man who gave to those in need, including many charities and had a special place in his heart for St. Jude’s Children’s Hospital. He was predeceased by his parents, Michael and Jane (Pappas) Scandale, his sister Florence (Scandale) Yannios and his grandson Nicholas Tefft. George is survived by his loving wife of nearly 64 years, Jean, two daughters, Dr. Joanne (Robin) Scandale of Camillus, NY and Florence (Robert) Tefft of Louisville, KY, his niece Lisa Yannios, and his nephew Christopher Kallioniotis of Plainville, CT. Services are private. Arrangements by B.L. Bush & Sons Funeral Home, 10 Genesee St., Camillus, NY 13031 In lieu of flowers the family would ask that any contributions be made to St. Jude’s Children’s Hospital, 501 St. Jude Place, Memphis, TN 38105 or online at www.Stjude.org in George’s honor. Please sign his guestbook at www.BLBUSH.com

George J. Scandale, beloved father and husband, went home to be with the Lord on October 28, 2021. He was a long time resident of Northampton, MA until his recent move to Camillus, NY where he spent his days surrounded by his family, exploring... View Obituary & Service Information

The family of George J. Scandale created this Life Tributes page to make it easy to share your memories.

Send flowers to the Scandale family.