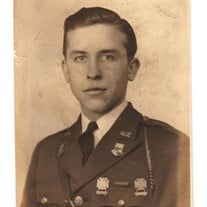 Jack L. Barrick, 96, from Syracuse, NY died peacefully Saturday, December 10, 2016 with his loving family. Born on February 8,1920 in Harrison County W.Va. Shinnston, to Raymond and Nell Haught Barrick. He was also predeceased by his brother Gordon R. Barrick and sister-in-law Betty Barrick, twin sister Margaret Stokes and brother-in-law Dr. Hugh Stokes and brother-in-law Jim Haney. Lastly, Jack's beloved wife, Polly Barrick, of 71 years in 2014. Jack is survived by his daughter, Linda Newman Lehman and son- in- law Dave Lehman, two grandsons, Randolph Newman and Peter Newman, two great-grandchildren John and Caiti, sister-in law Mary Lou Haney and nephew Curtis Haney (Brenda). Other nieces and nephews are Margaret (Peggy) Stokes Nielsen (Craig), Gregory Stokes, and Ann Boulware. Jack, brought up in Depression Era WV, always had wonderful touching stories and a brilliant comical mind which along w/ Polly’s, usually made them the life of the party! If only we would have taped these tales but then most folks would think... we were only crazy and that type of humor would be lost in translation. Jack's life gives rise to the little wiggle worms who sat in class thinking about "OTHER STUFF". The little Blue Bird classes don't always remain Blue Birds and given enough challenges usually survive. Loving animals all his life, Jackie was often called upon to heal animals that were sick. He had a beloved injured race horse and was the only one who could ride him. Jack was a graduate of WVU and went on to distinguish himself in the field in agronomy and soil conservation. He ate by getting enough people to buy him a meal at the boarding houses. A member of Delta Tau Delta, Scabbard and Blade, and Alpha Zeta., he also served as an infantry officer in World War II and was an employee of U.S. Dept of Agriculture for 33 yrs. Work began in Philippi assisting landowners in planning and applying soil and water conservation measures on their land. Additionally, he assisted coal mine operators and soil conservation districts in stabilizing strip-mined land in W.Va. His career continued as manager of a pilot flood control project in Salem, WV, after which he worked for 6 years in Vermont as the Assistant State Conservationist. His last U.S.D.A assignment was State Resource Conservationist for New York State, a job he held for 17 years. A highlight of his work in New York was the New York State Erosion and Sediment Inventory, a pilot project that he initiated and directed. Jack’s long and productive career in resource conservation and development led to citations in "Who's Who in the East 1986-7", "Men of Achievement 1988", and "The International Directory of Distinguished Leadership 1989”. Upon retirement from U.S.D.A., he enjoyed a second career as a stockbroker, was a member of Fairmount Community Church, loved gardening, and was a duplicate bridge life master. The family wishes to thank the VNA of CNY, especially Debra Lynch who was so dedicated for a long time. And of course Courtney McClellan who knew how to come in and act as a wonderful healer at just the right time for all of us. Calling hours are Thursday 4 to 6 pm at B.L. Bush & Sons Funeral Home, 10 Genesee St., in the Village of Camillus. Services will be Friday 10 am at the funeral home. Burial with military honors will follow at Greenlawn Cemetery, Warners. Contributions in lieu of flowers may be made to Fairmount Community Church, 4801 W. Genesee Street or Wounded Warrior Project, PO BOX 758516, Topeka, KS 66675. https://www.woundedwarriorproject.org/donate Please sign the guestbook at www.BLBUSH.com

The family of Jack L. Barrick created this Life Tributes page to make it easy to share your memories.

Send flowers to the Barrick family.