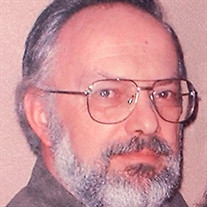 James (Jim) Carl Carter Sr (75) entered into his eternal rest on November 11th 2021 after a brief illness. Jim was a beloved husband, father, grandfather, great-grandfather, uncle, and friend! He was affectionately known as Uncle “Zoo” to many nieces and nephews. A 36-year retired machinist of Carrier Corp, he was also a master archer, hunter, fisherman, carpenter, and outdoorsman. He leaves behind many years of memories of building, hunting, fishing, camping, and laughter. He proudly served in the US Army during the Vietnam War-Era from 1966-1968. A native of Warners N.Y., he moved his family to Camillus, N.Y. in 1971 where he lived the rest of his life. For more than 54 years, he was married to the love of his life Donna Ann Carter (nee Burghart). He was preceded by his love earlier this year in July. Jim leaves behind 3 children Laura A. Carter of Camillus, NY, James (Michelle) C. Carter Jr of Watauga, TN, and Kevin (Roberta) M. Carter of East Brunswick, NJ. In addition, he leaves behind 6 grandchildren, Mathew Okul, Allen Simerly, James (Trip) C. Carter III, Elizabeth (Geoffrey) Munday, Justin Reinsmith, and Jacob Carter. Along with the grandchildren, Jim and Donna shared a very special relationship Tomica Hanville. Tomica was considered “one of the family” for the 7½ years they spent together. In addition to the 6 grandchildren, they also had 7 great-grandchildren. Within that family, Donna and Jim loved many nieces and nephews through the years. Jim was very close to his 6 siblings, Charles (Evelyn) W. Carter Jr of Medford, OR, Mary Jane (Donald) Perry of Siloam Springs, AR, Florence (Kenneth) Ellis of Virginia Beach, VA, Linda Snyder (nee Carter) of Viginia Beach, VA, Suzanne Ogden (nee Carter) of Camillus, NY and Jonathan (Leighann) Carter of Monroe, MI. He often recalled many crazy stories of the years he spent growing up with them and how he cherished his relationship with them. He was also preceded by his parents Charles William Carter and Natalie Margarite Carter. Jim’s impact on the people that knew him could never be overstated. At times he was larger than life as he loved to tell stories and laugh loudly. He worked hard, did what he believed was right, and loved all his family deeply. To Jim, family was the first and most important thing in life. His presence in our lives will be greatly missed. Services are Private. Arrangements by B.L. Bush & Sons Funeral Home, Camillus. Please sign his guestbook at www.BLBUSH.com

The family of James C. Carter Sr. created this Life Tributes page to make it easy to share your memories.

Send flowers to the Carter family.