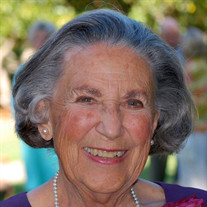 Jane Lally Bamerick, 93, of Fairmount was called to eternal peace on Monday at the Nottingham Retirement Community. Born in Syracuse on November 19, 1922, she was the daughter of Martin J. and Florence (Allen) Lally both natives of Oswego, NY. She lived most of her life in the Syracuse, NY area. A graduate of St. Anthony Padua High School in Syracuse, she attended Nazareth College in Rochester and graduated from Oswego State Teacher’s College. She was passionate about her career as a remedial reading teacher. She began her teaching career at Holy Family School in Fairmount, followed by the Syracuse City School District, and finally in the West Genesee School District. She was a member of several professional teaching organizations. Jane is predeceased by her loving husband of 67 years, Robert F. Bamerick and her three brothers: Thomas Richard and John Lally. Jane and Bob were long standing community active residents of 98 Huckleberry Lane in Fairmount. Their Catholic faith meant everything to them and they were involved in several Catholic Organizations. Jane is survived by her four children. Susan (Ronald) Wecht, Sally (Raymond) Dewitt, Ginny (Douglas) Hyde, and her son Robert F. Bamerick, Jr. She leaves seven grandchildren Michael McGrath, Emily Wecht Polcari, Alison Hyde, Melissa Bamerick Fox, Megan Hyde, Kevin Wecht, and Sean Bamerick. She will also be missed by her four great grandchildren: Ashley McGrath, Michael McGrath, Jack Polcari, & Keira Polcari. A heartfelt thanks is given to the extraordinary compassionate care given to Jane by the staff at The Nottingham RHCF. There will be no calling hours. A Mass will be celebrated on Friday, May 20th at 10:00 AM at Holy Family Church Fairmount. Private burial in Onondaga County Veterans Cemetery. Arrangements by B.L. Bush & Sons Funeral Home, Camillus, NY. In lieu of flowers, contributions may be made to the American Alzheimer’s Assoc. of CNY, 441 West Kirkpatrick St, Syracuse, NY 13204 or Holy Family Church. Grace was in her steps, heaven in her eye, and in every gesture dignity and love. Please sign the guestbook at www.BLBUSH.com

Jane Lally Bamerick, 93, of Fairmount was called to eternal peace on Monday at the Nottingham Retirement Community. Born in Syracuse on November 19, 1922, she was the daughter of Martin J. and Florence (Allen) Lally both natives of Oswego,... View Obituary & Service Information

The family of Jane L. Bamerick created this Life Tributes page to make it easy to share your memories.

Jane Lally Bamerick, 93, of Fairmount was called to eternal peace...

Send flowers to the Bamerick family.