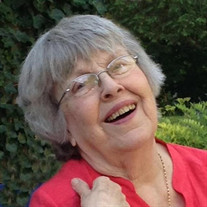 Judy Lincoln passed away peacefully after a short illness, with her family at her bedside. She was 88. In the 1920s, Judy’s father, Philip Newton Schuyler (1901-1969), a young architect and builder, laid out the streets for a new suburban housing development called Schuyler Lawns, a few miles west of Syracuse, on what was family farm land. He designed and built many of the first houses there. The new neighborhood became known as ‘Westvale’ when Judy’s mother, Ivy (Kemsley) Schuyler (1899-1990), thought up that more poetic name for the place. Judy was born there in 1933, attended Cherry Road School, then Solvay High School, graduating in 1951. After high school she enjoyed working in the office of Syracuse Glass Company. Judy married Roy Lincoln in 1956, the very first wedding in the newly built Robinson Memorial Church, and they had two children, Susan and Steven, both of whom are deeply grateful for having had two such damn nice parents. In 1969 Judy, Roy and the kids moved to Parsons Drive, into one of the houses her father built. Judy worked at Westvale Nursery School, Knit Nook in Fairmount Fair, and the gift shop Terra Art. In 1994 she and Roy moved into one of the first homes on Timber Ridge Drive in Camillus. There, Judy befriended neighbor after neighbor, helping to turn the brand new neighborhood into a place of conviviality and comfort. Judy was an avid reader of obituaries, an appreciator of nice ones and interesting ones, and her son, who wrote this one, wishes she was here to read it. Her most avid pleasure, though, was making and maintaining friendships, which she did with effortless aplomb, and there is no doubt her many, many friends will miss her as much as we will. Family and friends were everything to Judy; phone calls, in-person chats and get-togethers more valuable to her than gold. Predeceased by her beloved husband Roy in 1997, Judy is survived by daughter Susan Lincoln, Liverpool, son Steven and daughter-in-law Janice Lincoln, Lysander, grandson Kevin Vittitow, Rochester, her sister Sandra Hadley, Skaneateles, and many nieces, nephews, and cousins, all of whom she loved. Her effortless kindness, and especially her smile and her laugh, will be deeply, deeply missed. A small memorial service is planned for the spring. Arrangements by B.L. Bush & Sons Funeral Home, 10 Genesee St., Camillus, NY 13031. Judy’s family thanks the nice volunteers at Meals on Wheels, and also the kind and caring healthcare workers at Community Hospital, Iroquois Nursing, and St. Camillus. Please consider a donation to Echo Meals on Wheels, 4600 W Genesee St, Syracuse, NY 13219. Please sign her guestbook at www.BLBUSH.com

Judy Lincoln passed away peacefully after a short illness, with her family at her bedside. She was 88. In the 1920s, Judy&#8217;s father, Philip Newton Schuyler (1901-1969), a young architect and builder, laid out the streets for a new suburban... View Obituary & Service Information

The family of Judith (Schuyler) Lincoln created this Life Tributes page to make it easy to share your memories.

Judy Lincoln passed away peacefully after a short illness, with...

Send flowers to the Lincoln family.