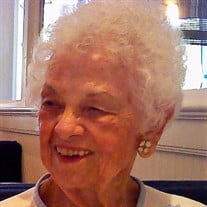 Lucile (Palmer) Donahue passed away on Tuesday, January 11, 2022 in Washington, IL at the age of 94. Born in Horseheads, NY on March 5, 1927, to William Henry Palmer and Ruth Goodyear, Lucile worked as a secretary and billing clerk, as well as a homemaker. Lucile married the love of her life, James “Jim” Frederick Donahue, on August 31, 1946. The family moved to DeWitt, NY in 1957, to Vestal, NY in 1969, then returned to DeWitt in 1973. After retiring, Lucile and Jim moved to Delray Beach, Florida, but spent their summers in Central New York. Lucile was a former secretary and director of the Ladies Auxiliary of the Firemen’s Association of the State of New York, a member of several local volunteer fire auxiliaries, a former Girl Scout Leader, and a long time communicant of St. Alban's Episcopal Church of Syracuse, NY and St. Paul’s Episcopal Church of Delray Beach, FL. Lucile was an avid golfer and bowler, and she cherished reading, playing cards, and going on long drives with her husband Jim. However, Lucile’s greatest pride and joy was her family. She greeted us with a welcoming “hellooo!” whenever we called or visited and sent us on our way with wonderful, tight hugs. Her long and warm thank you notes included many exclamation points as she reminded us of her love and gratitude. And of course, her concern was always for us and not herself (“Oh, don’t worry about me!”). We will miss her dearly and are so thankful for the chance we had to be part of her long and full life, and for having her such an important part of ours. Lucile was predeceased by her parents, her husband James F. Donahue in 2016, and her sisters, Virginia Margeson in 1991, Lauralie Evans in 1997, and Martha Hayes in 2015. Lucile is survived by her two sons William J. (Patricia) Donahue of Wesley Chapel, FL, and Timothy S. (Amy) Donahue of North Conway, NH, as well as her daughter Sharon (Raymond) Houck of Washington, IL.; eight grandchildren: Brian (Loretta) Donahue, Michael (Haley) Donahue, Karl (Angie) Houck, Laura Catherine Houck, Eric (Heather) Donahue, Jonathan (Jennifer) Donahue, Detrie (Kevin) Sheehan, and Kellie (Brian) Ebeling. Lucile also leaves ten great-grandchildren: Connor, Seth, Emily (Trevor), Jakob (Hannah), Katrina, Ashlynn, Kolbie, Abigail, Phoebe, and Peyton, two great-great-grandchildren: Irelynn and Sammi Jo, brother-in-law in law Norman Hayes, sisters-in-law Josephine Larson and Anita Donahue, and several cousins, nieces and nephews, including two special nieces: Lynne Norris and Sylvia Chappell. Services will be held in Spring at St. Alban’s Episcopal Church, Syracuse, NY. Lucile and Jim will be buried together in Oakwood Cemetery, Chittenango. Arrangements by B.L. Bush & Sons Funeral Home, Camillus, NY. In lieu of flowers, donations may be made to Threads, Hope and Love NFP, 121 Zinser Place Washington, IL 61571 or St. Alban’s Episcopal Church, 1308 Meadowbrook Drive Syracuse, NY13224-1718 for the St. Alban’s Mission Fund. Please sign her guestbook at www.BLBUSH.com

Lucile (Palmer) Donahue passed away on Tuesday, January 11, 2022 in Washington, IL at the age of 94. Born in Horseheads, NY on March 5, 1927, to William Henry Palmer and Ruth Goodyear, Lucile worked as a secretary and billing clerk, as well... View Obituary & Service Information

The family of Lucile (Palmer) Donahue created this Life Tributes page to make it easy to share your memories.

Send flowers to the Donahue family.