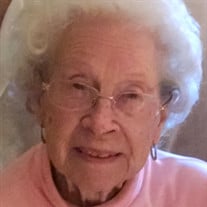 Lucy Ethel Graves Young, of Fairmount passed away peacefully and contentedly on November 19, 2018 at the Jewish Health & Rehabilitation at Menorah Park where she was welcomed in July. She was “Aunt Ethel” to many nieces and nephews for whom, over the years, she became a source of inspiration and admiration. Lucy was born in 1921, the fifth child of seven. Her youth was characterized by disruption and hardship, having lost her mother when Lucy was six. Lucy spent her teen years in foster care, worked during her high school years, all during the very trying times of the Great Depression. She emerged from the 1930's a strong woman and entered the work force. In 1945 she met the “love of my life”, Everett Young, a young soldier home on leave after having been wounded in the war in Europe. He had earned two Purple Hearts and a Bronze Star. Lucy and Everett were married for 50 years when he predeceased her in 1996. Sadly, their two children died during their youth, John in 1963 and Judy in 1969. In spite of these tragedies, Lucy pressed on, working and contributing to and enriching others’ lives. She worked for 25 years at New York Telephone, volunteered at the Camillus Elks Club, and for more than 20 years volunteered at the Red Cross blood bank (having donated several gallons of blood as well). In 2005, she experienced the onset of Alzheimer’s Disease but she was able to remain at home until July 2018 thanks to support from family and friends. She greatly appreciated visits, flowers, candy and cards from her great nieces, Kirsten Young and Valerie Harvey; niece, Kim Young; nephew Rick Young; great nephews David Young and Chris Young (and his mom, Doie) as well as long-distance support from brother-in-law, Richard Young. Lucy especially enjoyed visits and almost nightly phone calls from her nephew, Carl Young and his wife, Sil. Interaction with friends and neighbors enabled her to remain at home as long as she did. She truly appreciated neighbors Tony and Gale Juiliani, Betty Kitt, and very special friend Jane Ward, along with professional assistance from Home Instead. Calling hours will be held from 1:00 until 2:00 p.m. on Friday, November 30 at the B.L. Bush & Sons Funeral Home, 10 Genesee Street, Camillus, NY with a memorial service immediately following. Burial will be in Greenlawn Cemetery, Warners. At Lucy’s request, donations may be made to St. Paul’s United Methodist Church, 2200 Valley Drive, Syracuse, NY 13207. Please sign her guestbook at www.BLBUSH.com

Lucy Ethel Graves Young, of Fairmount passed away peacefully and contentedly on November 19, 2018 at the Jewish Health & Rehabilitation at Menorah Park where she was welcomed in July. She was &#8220;Aunt Ethel&#8221; to many nieces and nephews... View Obituary & Service Information

The family of Lucy Graves Young created this Life Tributes page to make it easy to share your memories.

Send flowers to the Young family.