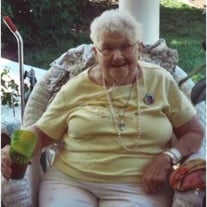 Madeline Anita Bedore Lutters, 90, of Plattsburgh and formerly of Camillus, beloved sister, mother, grandmother, and great grandmother, died Sunday at CVPH Medical Center. She was born on June 22, 1918, in Plattsburgh, NY the daughter of Bertha and Clarence Bedore. Madeline spent her childhood in Plattsburgh and in Saranac Lake, of which she was particularly fond. As a young girl, she loved music and dancing. Madeline married Carl A. Lutters at the Post Chapel in Plattsburgh in February 1943. At the conclusion of World War II, they moved to Camillus, NY, where they raised two sons, Carl, Jr., and William. In addition to raising a family, Madeline worked in food service at local schools, was an avid bowler, and spent summers along the shores of Lake Ontario and the St. Lawrence River. Throughout her life, she loved taking long walks and enjoyed flowers, especially lilacs. Upon the death of her husband in July 1995, Madeline returned to Plattsburgh to live with her son Carl, daughter-in-law Kris, and her three grandchildren. During that time she spent many days with an aide and special friend, Susan Cadieux, exploring the North Country. Later, she lived for a number of years at the Victoria House and Evergreen Nursing Home, both in Plattsburgh, where she made many friends and received excellent care. Madeline loved life, her church, Plattsburgh, and, most of all, her family. She is survived by two cherished sisters, Betty Tobrocke and Gail Bedore, and by a loving brother, Donald Bedore and sister-in-law Carol, all of Plattsburgh. Madeline is survived by her son William and her daughter-in-law Cheryl, and grandchildren Erik, Zachary, and Amy, all of East Syracuse. She is also survived by her son Carl, of Plattsburgh, and grandchildren Darcy Hathaway and her husband Michael, of Plattsburgh;, Matthew Lutters and his wife Christine, of Burlington, Vermont; and Dana Lutters, of Manhatten. Her only great-grandchild, Ella Madeline Hathaway, brought a smile to Madeline’s face each day. In addition to her husband, Madeline was predeceased by four sisters, Isabelle Stringham, Dorothy Filion, Norma Fountain, Lois Bedore, and a brother, Richard Bedore. She is survived by many nieces, nephews, and their children. Calling hours will be held today (Monday) from 5 pm to 7 pm at R.W. Walker Funeral Home in Plattsburgh. Services will be 9:45 am Wednesday at B.L. Bush & Sons Funeral Home, 10 Genesee St., Camillus followed by a mass of Christian burial at 10:30 am Wednesday at St. Joseph’s Church in Camillus, NY. Burial will be in Maplewood Cemetery in Camillus. Please sign her guestbook at www.BLBUSH.com Memorial Tribute Link

The family of Madeline (Bedore) Lutters created this Life Tributes page to make it easy to share your memories.

Send flowers to the Lutters family.