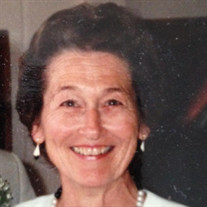 Margaret "Peggy" Ann (Roberts) Palmer, of Camillus, passed away peacefully on Saturday, August 1st, 2015 and will be greatly missed by all who had the pleasure of knowing her. Peggy was born to Martha and Arthur Roberts on June 27, 1928 and raised in Sauquoit, NY. She graduated from Chadwicks High School in 1946 and later went on to attend Keuka College graduating with a degree in Journalism in 1950. Peggy married Paul R. Palmer on June 9, 1951 and began their married life in New York City while Paul finished medical school and later moving to Camillus and Syracuse. Peggy had many interests including volunteering at the Maxwell Memorial library and with Meals on Wheels, attending church – first at Camillus Baptist and later at Fairmount Community Church (United Church of Christ), gardening, reading, cooking, summers at Otisco Lake, winters in Florida and her family. She was a devoted wife, Mom and Nonny sharing her loving gifts of patience, kindness and gentleness to all who had the pleasure of being her family member or friend. Peggy’s smile was infectious and beautiful. Everyone was touched by Peggy in their own special way and by the manner in which she could light up a room with her presence. Peggy was predeceased by her loving parents and brother Zeke. She is survived by her husband Paul of 64 years; her three children Tracey and George Carruth of Syracuse, NY, Susan Grady of Newburyport, MA, Paul and Kathy Palmer of Mendon, NY. She was Nonny to and is survived by seven grandchildren and three great-grandchildren; Catherine Carruth, Bryant and Kate Carruth, Erin and Jordan Hathaway, Brendan Palmer, Chris and Rachel Grady, Jared and Kelly Palmer, Jack, Will and Abigail Carruth. She is further survived by many special loved ones including Juan and Terry Becerra and family, many friends, cousins, nieces, nephews and in-laws. Calling hours will be held at the August 13th from 5 to 8 pm at B. L. Bush and Sons Funeral Home 10 Genesee Street Camillus. Services will be August 14th at 10:30 am in the Fairmount Community Church 4801 W. Genesee St, Syracuse. Burial will be in Maplewood Cemetery, Camillus. The family requests if you care to make a donation that it be in Peggy’s memory to the Alzheimer’s Association of CNY, 441 West Kirkpatrick St., Syracuse, NY 13204 Please sign the guestbook at www.BLBUSH.com

Margaret "Peggy" Ann (Roberts) Palmer, of Camillus, passed away peacefully on Saturday, August 1st, 2015 and will be greatly missed by all who had the pleasure of knowing her. Peggy was born to Martha and Arthur Roberts on June 27, 1928... View Obituary & Service Information

The family of Margaret "Peggy" Palmer created this Life Tributes page to make it easy to share your memories.

Send flowers to the Palmer family.