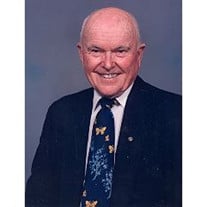 Rev. Leonard B. “Eli” Whitney 87 of Baldwinsville and formerly of Camillus died Sunday. Born in Syracuse he graduated from Syracuse Central HS in 1934, SU College of Forestry in 1938 where he lettered three years in swimming and Boston Univ. School of Theology in 1943. He served many churches as a Methodist Minister including Pultneyville, NY 1943-46; Hannibal-Hannibal Center 1946-50 and as associate at Fulton First 1946-48; Phelps 1950-63; Camillus First 1963-69 and his proudest accomplishment was the formation of the congregation that created Immanuel United Methodist Church. He was their first pastor until his retirement in 1982. In addition he took great joy in the saving of church bells from other churches to create the Bell Tower. He has served N. Syracuse Andrews Memorial UMC as associate from 1982-88, as an Interim at James Street UMC and Marcellus UMC. He has been the Protestant Chaplain at Loretto Geriatric Center and most recently served at Marietta Christian Church (former UMC). Eli was a former volunteer Fireman for over 20 years, a Mason since 1947, a member of Boy Scouts of America, Finger Lake Council and a member of Camillus Rotary since 1967 with perfect attendance for over 30 years and in addition a Paul Harris Fellow and started a project in early 70s to donate turkeys to needy families. He had been a long time water director and counselor at Camp Casowasco. He had served on the Board for United Methodist Federal Credit Union. He had been an usher for Syracuse University Football since 1959 and Basketball from 1963 and usher captain at both Manley and the Dome before retiring in 1987. He is predeceased by two sisters; Dorothy Fellows and Harriet Whitney Borchers. He is survived by his wife of 22 years, the former Beatrice (Dean) L. Peffers; a son Bradd J. Whitney of Bedford, TX; four daughters, Nancy Whitney Carroll of Bedford, TX, Merrilee and husband Randy Frese of Syracuse; Diane Peffers and husband Charles Stewart of Fairfax, VA and Bonnie Peffers and husband Gerry Nicholson of W. Monroe; two sisters Jane Eleanor Roberts of Oswego and Ruth Whitney Nyberg of Stockton, CA; eight grandchildren, Jeff and his wife Mary Lee McClaskey, Shari McClaskey, Christian Whitney and Tara Peffers all of Syracuse, Michael Stewart and Heather Stewart of Fairfax, VA, Andrea Frese of Raleigh, NC, Alison Frese Higgins and husband Paul, of Cincinnati, OH and eight great grandchildren; several nieces and nephews. Services are 2 pm Saturday at Immanuel United Methodist Church “Church of the Bells”, 303 Kasson Rd, Camillus. Spring burial in Mexico Village Cemetery. Contributions in lieu of flowers to Camp Casowasco , 158 Casowasco Dr. Moravia, NY 13118. Arrangements by B.L. Bush & Sons Funeral Home, Camillus.

Rev. Leonard B. &#8220;Eli&#8221; Whitney 87 of Baldwinsville and formerly of Camillus died Sunday. Born in Syracuse he graduated from Syracuse Central HS in 1934, SU College of Forestry in 1938 where he lettered three years in swimming and... View Obituary & Service Information

The family of Rev. Eli B. Whitney created this Life Tributes page to make it easy to share your memories.

Rev. Leonard B. “Eli” Whitney 87 of Baldwinsville and formerly...

Send flowers to the Whitney family.