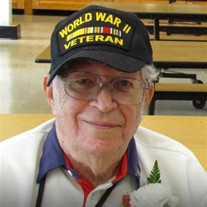 Robert F. Doyle, 95, of Camillus, beloved husband, father and grandfather went home to be with the Lord on Monday while surrounded by his loving family. Robert is the son of the late Dennis Morgan and Mae Doyle. He was pre-deceased by his loving wife, Barbara Mathison Doyle and his two sisters, Rita Gebhardt and Genevieve Turner. Robert was a very proud World War II Army Veteran, and in 2013, had the opportunity to be part of the Honor Flight Syracuse Mission Two. Bob was often seen wearing his WWII Veteran’s cap, which was a gift from his niece, Sister Rita Shawn. Robert taught 5th grade at Lakeshore Road Elementary School until he retired. He was the founder of the Lakeshore School Flag Day. Always involved in education, Bob was the co-founder, past president, and newsletter editor for the NYSUT retirees of Central NY. He was a 50 year member of the Tom Dooley Choraliers and a member of Ancient Order of Hibernians. Robert was a parishioner of Holy Family Church and the Holy Name Society. Mr. Doyle is survived by his wife Audrey Doyle, his sons Robert Doyle and Dennis Doyle (Deb), and three daughters Sally Wilson (Ken), Sharon Cariglio (Michael) and Shannon Burdick (Marcus). He was a proud grandfather of Barbie, Candido, Katie, Courtney, Robbie, Emily, Brittney, Brandon, Mikey, Kelly and Jennie and 5 great grandchildren. In addition, he had 4 step sons, and 7 step grandchildren. Visitation will be held Wednesday, February 18th from 4 to 8 pm at B.L. Bush & Sons Funeral Home, 10 Genesee St, Village of Camillus. A Mass of Christian burial will be held at Holy Family Church on Thursday, February 19th at 1:00 pm. Burial will be in St. Mary’s Cemetery, DeWitt. Contributions in lieu of flowers may be made to Honor Flight Syracuse, Inc., PO Box 591, Syracuse NY 13209-0591 or http://honorflightsyracuse.org/donations Please sign the guestbook www.BLBUSH.com

Robert F. Doyle, 95, of Camillus, beloved husband, father and grandfather went home to be with the Lord on Monday while surrounded by his loving family. Robert is the son of the late Dennis Morgan and Mae Doyle. He was pre-deceased by... View Obituary & Service Information

The family of Robert F. Doyle created this Life Tributes page to make it easy to share your memories.

Send flowers to the Doyle family.