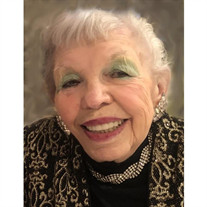 Rosanne Koziara, of Jamesville, NY died on May 7, 2020 at the age of ninety-three. Previously, she lived in Goshen, NY, her home for forty-seven years, and Waywayanda, NY where she resided for eleven years. Born in Bayonne, NJ on February 13, 1927, she was the daughter of Edward and Mary Kopchinsky and the widow of the late Alexander E. Koziara. A former member of St. John and the Evangelist Church in Goshen, NY she also sang in the choir for thirty years. As a sixty-three year member of the Catholic Daughters of America, she served as Regent of Court Genevieve Walsh #918 for three years and was a charter member and area chairman of the Past Grand Regents chapter. An avid painter, she was also a member of the Goshen Art League. Her musical career encompassed a thirty-two year membership with the Orange County Classic Choral Society and the former Halcyon Ensemble, performing four times at Carnegie Hall in New York City. She also sang with the Tri-State Regional Opera Company in Middletown, NY, and performed in concert with Syracuse Chorale. After she retired from her position as administrative senior clerk for the New York State Division for Youth, she served as an election inspector for the Goshen Central School District. Other affiliations include her membership in C.S.E.A. and A.F.S.M.E, her service as chaplain for the Goshen Senior Citizens’ Club, as well memberships in the Society of the Little Flower and the Saint Labre Indian School. She is survived by her daughter, Kristyne Koziara Singer and her husband William Singer of West Orange, NJ, her son Alexander Koziara III, and his wife Michele Fitzgerald Koziara of Syracuse, NY. Her four grandchildren are Katya Alexandra Koziara and Emma Rose Koziara, Edward Caleb Singer and Bryan Hudson Singer. She is also survived by her sister Jean Risley of Cape Cod, MA, along with many nieces, nephews, grand-nieces and grand-nephews. Her family states that Rosanne was a true Renaissance woman, a classically trained musician, an oil painting artist, conversant in five languages, and a world traveler- visiting twenty-eight countries on five continents. She imparted all of her talents, including her love of classical music and opera to her children and grandchildren, leaving them a wonderful legacy. A celebration of her life will be held at a later date. Private burial services will be held in St. Johns Cemetery, Goshen, NY. Arrangements by the B.L. Bush & Sons Funeral Home, Camillus, NY. Please sign her guestbook at www.BLBUSH.com

Rosanne Koziara, of Jamesville, NY died on May 7, 2020 at the age of ninety-three. Previously, she lived in Goshen, NY, her home for forty-seven years, and Waywayanda, NY where she resided for eleven years. Born in Bayonne, NJ on February 13,... View Obituary & Service Information

The family of Rosanne M. Koziara created this Life Tributes page to make it easy to share your memories.

Send flowers to the Koziara family.