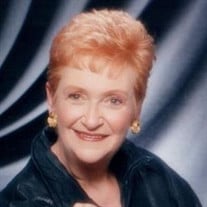 Sally Ruth Smithson, 88, passed from this life on June 21, 2018. She was born in Syracuse, NY on February 18, 1930 to former Mayor of Camillus, John VanKleef and Ruth Croston VanKleef. A graduate of Camillus High School, she was Salutatorian of the Class of 1947. Married in 1949, Sally was employed by General Electric in 1962. She worked with the Technical Writers on Project Apollo until the Department was moved to Florida. Transferred to the Radio Guidance Operation, she worked in their library until the Department was dissolved. Sally was moved over to Heavy Military Electronics Department to work with the Tech Writers there. She was promoted to Secretary to the Manager of the Manager's Skills Training Programs. During that time, she created and conducted a l3-week training program for manager's secretaries. In 1970, she moved to Syracuse, IN and was Secretary to the Sales Manager of the Sea Nymph Boat Company. Sally purchased her own business, a small bar and restaurant in Mentone, Indiana in 1975. In 1983, her doctor ordered a warm, dry climate so she sold the business and her house. Sally and her four Indiana dogs headed West in her covered station wagon. The Lord led her to Las Cruces, (The City of the Crosses), the Rio Grande River, the beauty of the Organ Mountains and the desert captured her. Her journey stopped here, no more snow to shovel or ice to scrape from windshields. She built a house on the West side, with a marvelous view of the City and the Mountains. Sally's greatest joy was witnessing to the-many blessings bestowed on her. She was a Team member on several Cursillo and Kairos weekends. After a short-term Ministry to Honduras in 1996, she became involved with prison ministry both at the NM State Prison and the Doña Ana County Detention Center.She was a Member -at -Large of the Order of St. Luke Healing Ministry; numerous Bible Study groups and two trips to Israel were blessing to her spiritual growth. Sally was a member of the first Las Cruces group to be trained as Court Appointed special Advocates for Abused and Neglected Children, and she worked briefly with the Rape Crisis Center. Every year, she knitted many blankets, donated through. Project Linus, to needy and neglected children. She served as Lector at St. Mary's-at-Hill and was a Vestry member. Preceding her in death were her parents; infant sons, Robert Alan and Mark Arie Smithson; infant daughters, Mary Joanne and Adrianna Joy Smithson; brother, MSGT. Robert A. VanKleef, USA Ret.; beloved nephew, John R. VanKleef, and her cherished companion of 22 years, Frank G. Bieber. Sally is survived by her daughters, Irene Smithson Barrows and Nancy Smithson Bushman. Private burial will be in Maplewood Cemetery in Camillus. Sally will be at peace in the place her heart never left the hills of home. Memorial donations may be sent to La Casa Domestic Violence Center, P0 Box 2463, Las Cruces, NM 88004.

Sally Ruth Smithson, 88, passed from this life on June 21, 2018. She was born in Syracuse, NY on February 18, 1930 to former Mayor of Camillus, John VanKleef and Ruth Croston VanKleef. A graduate of Camillus High School, she was Salutatorian... View Obituary & Service Information

The family of Sally VanKleef Smithson created this Life Tributes page to make it easy to share your memories.

Send flowers to the Smithson family.