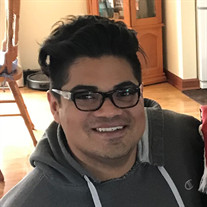 Stephen Byron Strough passed away on September 28, 2021 at the age of 30. Stephen was born in La Ceiba, Honduras and arrived in Syracuse, with his brother, on December 12,1991. A date that was celebrated annually as Airplane Day. Stephen was a joyful child, enjoying a close relationship with his brother, grandparents and cousins. His fondest memories growing up were from the simple things…camping, picking apples, making gingerbread houses and traveling. Family traditions were the most important to him and he never wavered from them even as he grew older. He had a curious mind, was an avid reader, a piano player and a great trivia partner because of all the random information he had stored in his brain. Stephen graduated from Westhill High School in June 2009 and then from SUNY Potsdam in 2013 with a degree in Spanish Education. Before settling in Syracuse, he went to Madrid where he taught English. After that he worked for a few years as an ENL and Spanish teacher in Syracuse. As a cultural activity he had his class write to the royal family in Spain and were thrilled when they got a response. Even after he left teaching that was a source of pride for him. Stephen loved to travel and experience different cultures. He did a semester abroad in Barcelona and when there he took advantage of the easy access to other places in Europe. He went to Paris, Rome and a concert in Amsterdam. In earlier years he visited Belize and Roatan Honduras and was able to get a sense of his own culture. Stephen was a caring and loving person. His smile was radiant and he had a heart of gold. He showed great compassion and empathy for people, especially the elderly. He was always ready to help anyone and everyone. Stephen was loved beyond measure. His death leaves a gaping hole in the lives of those he leaves behind. Stephen is survived by his parents, Philip and Sally Strough; his brother, Joshua Strough; many aunts, uncles, and cousins. We hope he finds the peace and happiness he sought throughout his life. A private service will be held at a later date. Keep him in your thoughts and prayers. Arrangements by B.L. Bush & Sons Funeral Home, 10 Genesee St. Camillus, NY 13031. In honor of the things that were important to Stephen we are asking that donations be made to: We Rise Above the Streets Recovery OutReach; 404 Oak St., Syracuse, NY 13203 or online at https://www.ifweeattheyeat.org Please sign his guestbook at www.BLBUSH.com

Stephen Byron Strough passed away on September 28, 2021 at the age of 30. Stephen was born in La Ceiba, Honduras and arrived in Syracuse, with his brother, on December 12,1991. A date that was celebrated annually as Airplane Day. Stephen... View Obituary & Service Information

The family of Stephen B. Strough created this Life Tributes page to make it easy to share your memories.

Send flowers to the Strough family.