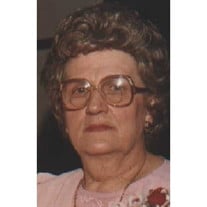 Virginia "Jane" (Hines) Freeman, 81, of Camillus, died Wednesday at home of her daughter following a long illness. Born in Syracuse she had been the Head Caterer for Mattydale VFW 3146 and also a waitress. She enjoyed cooking, grocery shopping... View Obituary & Service Information

The family of Virginia Freeman created this Life Tributes page to make it easy to share your memories.

Send flowers to the Freeman family.