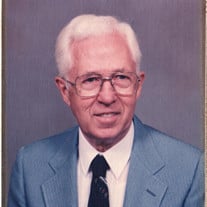 William H. “Bill” Riley, 95, of Camillus went to be with the Lord on Tuesday, October 11, 2016. He was born October 5, 1921 in Iola, KS to George Alvus and Ida May Riley. He graduated from Iola High School and attended Iola Community College. Bill served with the US Army Air Corps as a medic during WWII in India with the rank of Tech Sergeant. He worked for A&P Markets in Iola before joining Sears, Roebuck & Co. He moved into Syracuse area in 1956 where he retired from as a store manager after 35 years with Sears. In retirement he found joy in helping customers at the Package Depot in Fairmount. In 1949, he married Catherine P. “Pat” Brown in Washington, DC. He was united in marriage with Gloria Ladue in Rome, NY and they recently celebrated their 25th Anniversary. He was a member of Christ Community Church of the Nazarene in Camillus. Bill was predeceased by his 1st wife Pat; his sisters Orpha, Doris and Ruth; his brothers Glen, Gale & Lewis. Bill is survived by his wife Gloria, a daughter Jeanne (Evan) Lyons of Minoa; two sons Bill of Oregon, Bob of Liverpool; stepdaughters Robin (Kevin Sharpe) Ladue and Tongela Ladue both of Rome; granddaughters, Erin (Marlow) Stanton of Oregon, Tongela Ladue of Rome; grandsons Colin Lyons of Minoa, Collin and Trevor Sharpe of Rome, Joshua (Nichole) Ladue of Colorado, Amber (Charles) Mizer of Tenn., and several great-grandchildren. Calling hours will be 11 to 1 pm Monday with services to follow at 1 pm in Christ Community Church, 3644 Warners Road, Syracuse, NY 13209. Burial will in Greenlawn Cemetery, Warners. Arrangements by the B.L. Bush & Sons Funeral Home, Camillus. Special thanks to Brother-in-law, Rick Blake for his caring and devotion as a caregiver during the last few years. In lieu of flowers contributions may be to Christ Community Church. Please sign the guestbook at www.BLBUSH.com

The family of William H. Riley created this Life Tributes page to make it easy to share your memories.

Send flowers to the Riley family.