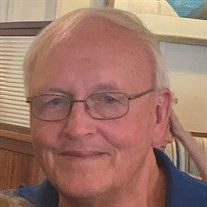 Dale W. Gifford, 70, of Camillus passed away unexpectedly Wednesday surrounded by family. Born in Deposit, NY, he graduated from Cornell University in 1971 with a Bachelors degree in General Agriculture. He then went on to serve in the US Army for 2 years before completing both a Bachelors degree in History and a Masters degree in Counseling Psychology from SUNY Oneonta. Dale worked as a Counseling Psychologist for the US Department of Veterans Affairs in Syracuse, retiring in 2009. Following his retirement he worked for VR&E Services for Veterans until his untimely death. He loved sports and worked for the West Genesee Athletic Department. Dale was also coach for the Camillus Youth Basketball Association and the Western Onondaga Youth Soccer Association, having also served as a past President. He was most proud of coaching and being present for his children’s sporting events. He enjoyed biking and walking on the Erie Canal, was an avid reader and most of all loved spending time with his grandchildren. He was predeceased by his brother Thomas Rex Gifford (2009) and his nephew Duane Thomas Gifford (2008). Surviving are his wife of 47 years, Susan M. (Clark); daughters Carrianne (Kenneth) Kirby III of Camillus, Melinda Gifford of Camillus, and Amber Gifford of Camillus; son Andrew (Jaclyn) Gifford of East Islip; brother Terry V. (Ann) Gifford of Ithaca; sister-in-law Sharon Gifford of Masonville; four grandchildren Karisa Kirby, Kenneth Andrew Kirby IV, Ella Gifford and Lucy Gifford; and several nieces and nephews. The family would like to thank the Neuroscience ICU at Crouse Hospital for their excellent care and compassion. Calling hours will be 1 - 3pm and 5 - 7:30pm on Friday, December 20 at B. L. Bush and Sons, 10 Genesee Street, Camillus. Services with military honors will also be held at the funeral home Saturday, December 21 at 10am. Contributions in lieu of flowers may be made to the Syracuse DAV- Transport, c/o VAMC, 800 Irving Avenue, Syracuse, NY 13210 or the American Diabetes Association, 5 Pine West Plaza, Suite 505, Albany, New York 12205 Please sign the guestbook at www.BLBUSH.com.

Dale W. Gifford, 70, of Camillus passed away unexpectedly Wednesday surrounded by family. Born in Deposit, NY, he graduated from Cornell University in 1971 with a Bachelors degree in General Agriculture. He then went on to serve in the US Army... View Obituary & Service Information

The family of Dale William Gifford created this Life Tributes page to make it easy to share your memories.

Send flowers to the Gifford family.