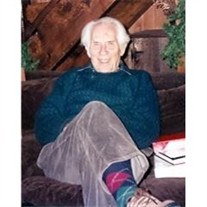 Dr. Karl M. Schmidt, Jr., 91, of Clayton, NY and Syracuse died Sunday at the Good Samaritan Hospital in Watertown. Son of the late Karl M. Schmidt and Jennie Greenia, Karl was born in Utica on March 19, 1917. He attended Utica Free Academy. Karl graduated Magna Cum Laude from Colgate University in 1948. He received his M.A. and Ph.D. degrees from Johns Hopkins University. He was a member of Phi Beta Kappa, Past President of the Syracuse University chapter. He was also a member of Sigma Nu Fraternity. He served in the Coast Guard during World War II. Karl had a distinguished academic career. He taught at Union College in Schenectady prior to moving to Syracuse. In 1957, he joined the faculty of the Maxwell Graduate School at Syracuse University. During his tenure at Syracuse, he published numerous books and articles. He was most proud of his book entitled, “Henry A. Wallace Quixotic Crusade, 1948”. An enthusiastic traveler, Karl traveled extensively for both work and pleasure. He lived in Lahore, Pakistan with his family from 1960-62 where he was the senior resident advisor at the Pakistan Administrative Staff College. He was also a visiting professor of political science at the University of Hawaii and at Colgate University. Passionate about politics, Karl was always active at the local level. He hosted numerous educational radio and television programs in Schenectady and Syracuse. For many years, he took a group of students to Washington, D.C. for an in depth seminar on national politics. Karl lived a very full life. He loved travel, music, photography, cars, coins and debate. He especially loved the St. Lawrence River where he lived since his retirement. He was predeceased by his wife Mary Murphy Schmidt, his sister Jane Kellmurray, and his grandson Mark Fowler. Karl is survived by his sons Michael and Glen (Karen Hayes) Schmidt; his daughter, Jill Fowler; grandchildren Eric Fowler, Bret, Carey, Christopher and Tim Schmidt, Ryan and Jenna Hayes; great-grandchildren Lindsay, Cody, Carly and Riley Fowler and Jessie, Toby and Madison Schmidt. Services are private. There are no calling hours. In lieu of flowers, please make contributions to the Mark P. Fowler fund at SUNY Upstate Medical Center, 750 East Adams Street, Syracuse, 13210 or to the Clayton Volunteer Fire Department, Graves Street, Clayton, 13624. Arrangements by the B.L. Bush & Sons Funeral Home, 10 Genesee St, Camillus, NY 13031. Please sign his guestbook at www.BLBUSH.com

The family of Dr. Karl M. Schmidt created this Life Tributes page to make it easy to share your memories.

Send flowers to the Schmidt family.