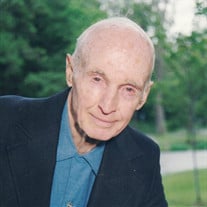 Edwin W. Lukens, beloved coach, teacher, writer, and front-porch philosopher passed away peacefully on January 24, 2019, at the age of 97. Born on December 9, 1921, to Randolph and Grace (Grove) Lukens, Ed grew up in Skunk City, on the west... View Obituary & Service Information

The family of Edwin W. "Ed" Lukens created this Life Tributes page to make it easy to share your memories.

Send flowers to the Lukens family.