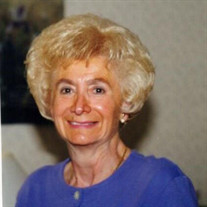 Fern R. Giambatista – Butler, 87, of Camillus passed away on March 18th 2021 just days shy of her 88th birthday at Syracuse Home in Baldwinsville. Born in Syracuse on March 27, 1933 to James and Pearl (Pink) Roberts, she graduated from Central H.S. and Tusculum University in Tennessee. She formerly lived in Baldwinsville, Long Beach, Long Island and owned homes in the Canary Islands and Newfoundland, Canada. Among the many places where Fern gave her time, energy and enthusiasm were Zonta International (where she was a long-time member and held many positions including modeling in their annual fashion show fundraisers), Syracuse Home Association (former board member and president), Daughters of the American Revolution, Corinthian Foundation (former board member), American Legion Auxiliary, Toastmasters (Distinguished Toastmaster Award), Syracuse Stage, Syracuse Symphony, Cat Coalition, and the Wagon Wheel Senior Center. At one time, she taught an 8-week course for OCS high school students on public speaking. Fern was an avid SU fan and holder of basketball & football season tickets. She was a member of Grace Episcopal Church in Baldwinsville. After college, Fern worked for Mohawk Airlines as a stewardess and was later promoted to head of the stewardess program. She moved to New York Airways in 1961 where she pioneered the helicopter stewardess program. Fern later worked as a Public Relations Manager for the NY/NJ Port Authority at JFK Airport where she greeted incoming dignitaries and royalty in a high-security hangar such as Jacqueline Kennedy, Prince Charles and Princess Grace of Monaco. At one time, she supervised 50 “Golden Girls” whose summer college work study was to assist arriving passengers at the JFK International Arrival Building. Mrs. G., as she was called, was always there to lend a hand to the out of state girls who often needed help finding a place to live in NYC. She was predeceased by her parents and siblings Richard H. Roberts, Betty Roberts Litzenberger, Constance Doris Roberts Moore; as well as her husbands; Joseph Giambatista in 1963 and Norman Butler in 1986. She is survived by her nieces and nephews; Barbara (Greg) Grover, John (Barbara) Litzenberger, Berwyn (Robert) Moore Brooker, Devi (Gordon) Moore Chancey, Karen Smith, Marilyn (Gene) Wedel; numerous great nieces/nephews and great-great nieces/nephews. She’s also survived by her Caretaker Tim Bressette and her cat Missy. Services will be May 15th at 10:30 am at B.L. Bush & Sons Funeral Home, 10 Genesee St. Camillus. Burial will be held in Oakwood Cemetery, Syracuse. Contributions in lieu of flowers may be made to McHarrie Life Foundation c/o Syracuse Home, 7740 Meigs Rd, Baldwinsville, NY 13027 or online at www.mcharrielife.org/donate or Grace Episcopal Church, P.O. Box 6, Baldwinsville, NY 13027. The family appreciates the care that was provided by Syracuse Home to Fern. Please sign her guestbook at www.BLBUSH.com

Fern R. Giambatista &#8211; Butler, 87, of Camillus passed away on March 18th 2021 just days shy of her 88th birthday at Syracuse Home in Baldwinsville. Born in Syracuse on March 27, 1933 to James and Pearl (Pink) Roberts, she graduated from... View Obituary & Service Information

The family of Fern R. Giambatista-Butler created this Life Tributes page to make it easy to share your memories.

Send flowers to the Giambatista-Butler family.