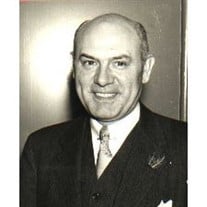 G. Richard Gottschalk, 97, of 151 E. Genesee St, Skaneateles died Wednesday at Finger Lakes Center for Living in Auburn. He was a native of Dayton, OH; a long time resident of Syracuse and lived in Skaneateles since 1966. He was a 1932 graduate of the University of Kansas at Wichita, Kansas in Arts and Sciences, a 1935 graduate of Dayton Law School in Dayton, OH, and attended Syracuse University. Mr. Gottschalk came to Syracuse in 1937 as Assistant to the President with New Process Gear Corporation and Director of its Defense Organization Division, before leaving in 1941 for military service in the Office of Chief of Ordnance, U.S. Army, in Washington, DC. He returned to Syracuse as Vice President and member of the Board of Directors of Merchants National Bank & Trust Company. For 40 years, he operated his own management consulting business. As President of the Center for Applied Research in Education, Inc. with Prentice-Hall, Inc. he published the 100 volume Library of Education series with offices in NYC and D.C. For 12 years, Mr. Gottschalk was a Commissioner of Education for the City of Syracuse and member of numerous professional societies, social organizations, and community groups. He has served on the Boards of Industrial corporations and as a Trustee of educational institutions of national importance. After retirement in 1986 he devoted himself to his private investments and consulting to non-profit enterprises. He was a member of Skaneateles Country Club and the Statler Club in Ithaca. He was also a former member of the University Club in Syracuse and D.C.; former president of the Aviation Club of Syracuse, former president of the Foreign Trade Club of CNY; and former deputy director of the Office of Industrial Development with US Atomic Energy Commission in D.C. Surviving are his wife of 66 years Henrietta (Hiscock) Gottschalk; a son John H. Gottschalk of Skaneateles; a daughter Nancy G. Male of Hilton Head Island, SC; a grandson Stephen Walker, Esq. of Sarasota, FL, two great granddaughters; a niece and a nephew. Services will be private. Arrangements by the B.L. Bush & Sons Funeral Home, 10 Genesee St., Camillus. Contributions in lieu of flowers may be made to the First Presbyterian Church, 97 East Genesee St., Skaneateles, NY 13152. Please sign his guestbook at www.BLBUSH.com

G. Richard Gottschalk, 97, of 151 E. Genesee St, Skaneateles died Wednesday at Finger Lakes Center for Living in Auburn. He was a native of Dayton, OH; a long time resident of Syracuse and lived in Skaneateles since 1966. He was a 1932 graduate... View Obituary & Service Information

The family of G. Richard Gottschalk created this Life Tributes page to make it easy to share your memories.

Send flowers to the Gottschalk family.