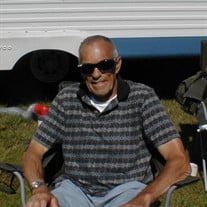 George William McCue Jr., 81, of Empire, MI, formerly of Syracuse, NY, died Monday, April 17, 2017. He was born November 27, 1935, in Syracuse, NY, the son of George and Naomi (Hendrickson) McCue Sr. George worked as a packer for Crouse-Hinds in Syracuse, NY, for 40 years. In 2005, he and his wife, Sharon, moved to Empire, MI, where they became active members of Glen Lake Community Reformed Church in Glen Arbor, MI. Prior to that, they had been active members of Immanuel Church of the Nazarene (now Christ Community Church of the Nazarene) in Camillus, NY. In his spare time, George was an avid amateur radio operator and was a member of Benzie Area Radio Friends (BARF) and Liverpool Amateur Radio Club. He was also a member of the Camillus, NY, and then the Howlett Hill, NY, volunteer fire departments for over 40 years. George was preceded in death by his parents. On June 12, 1965, in Onondaga, NY, George married Sharon Beare, who survives him. He is also survived by: his son, Jeffrey (Marceea) McCue of Hershey, PA; his grandson, Joshua McCue of Hershey, PA; his brother, David (Elaine) McCue of Mallory, NY; and his sister-in-law, JoAnne Beare of Empire, MI. Memorial services were held in Glen Arbor, MI. Graveside services will be Sat. August 26th at 10 am in Greenlawn Cemetery, Warners Memorial gifts may be given to the Glen Lake Reformed Church for Asilong, Kenya Christian School.

The family of George W. McCue Jr. created this Life Tributes page to make it easy to share your memories.

Send flowers to the McCue family.