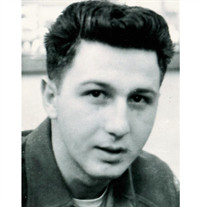 John Carl McCarthy Sr. 79, of Camillus passed away May 12th, 2019 kicking & screaming for one more day. Born in Syracuse his mother was Lucille Pizzuto & his dad was Carl McCarthy. His parents were the greatest & he had the best of two worlds (Italy & Ireland). Raised on Mechanic St. in the Village of Camillus (also called the Alley) he attended the Village School until it closed in 1955 & then went to West Genesee graduating the 2nd year it was open,1957. He joined the Army at 17 on Sept 3rd, 1957 and spent 2 & ½ years stationed in Vicenza, Italy. He was a member of the US Army Boxing team and also held “top secret” clearance. He was honorably discharged from Fort Hamilton, Brooklyn, NY in 1960. He married Phyllis Carfagno 3 months later and had 5 children, never understanding how or why she put up with him for 47 years (she passed away in 2007). John served a 5 year Union Plumber apprenticeship & worked 35 years holding positions of Vice President, President and Business Manager of Plumbers Local 54. As Business Agent, he negotiated the largest raises in the history of the union. He traveled extensively for work doing jobs in Pascagoula, MS on an oil refinery – Iran & Kharg Island in the Persian Gulf – Georgia at the Hatch Nuclear Plant - Virginia at the Coors Brewery – Peach Bottom Nuclear Plant in Pennsylvania – Watts Bar Nuclear Plant in Tennessee – and also spent 4 yrs in Las Vegas building & working on 11 different Casino projects. John was a life member of the Camillus Elks Lodge. His greatest and proudest achievement was his children until they gave him grandchildren! Later in life, as he had more time, he loved to visit - just to see them would make his heartbeat with joy. He knew that when it was time to go “upstairs” his dad would be reading the paper in his favorite chair and ma would be at the stove with water boiling for macaroni & a pot full of sauce with meatballs, sausage & a little veal waiting for him (don’t forget the roasted peppers soaked in oil & garlic for starters). He’d also find his loving wife Phyllis waiting for him at the table & he would know that everything would be ok! He was predeceased by his father Carl C. McCarthy in 1987, his mother Lucielle (Pizzuto) McCarthy in 1999 and his wife Phyllis (Carfagno) McCarthy in 2007. He is survived by his five children Theresa McCarthy of Morrisville, Tina Galvin of Williston, FL, Carmella Karagosian of Syracuse, John C. (Brenda), McCarthy, II of Memphis, and Dan (Cindy) McCarthy of Camillus; nine grandchildren Jeremy (Mary), Jessie, Jaime, Jackee, Katherine, Meghan, Erin, Nikolas, and Giovanni; two great grandchildren Kaebrey and Kamryn; his sister Sharon LaRobardiere of Parish; his loving companion Judy Peterson and many lifelong friends. His favorite saying was “fly now, pay later” something he hoped his kids will take to heart as we are only here for a short time and it should be a good time! Some of his last words were “yesterday I was just a kid playing in the alley”. Calling hours are Friday 5 to 8 pm at B.L. Bush & Sons Funeral Home, 10 W. Genesee St., Camillus. A Mass will be celebrated on Saturday at 9 am at Holy Family Church, Fairmount. Burial with military honors will be held in Maplewood Cemetery, Camillus. Contributions in lieu of flowers may be made to DAV Transportation, c/o Syracuse VAMC, 800 Irving Ave, Syracuse, NY 13210. Please sign his guestbook at www.BLBUSH.com

John Carl McCarthy Sr. 79, of Camillus passed away May 12th, 2019 kicking & screaming for one more day. Born in Syracuse his mother was Lucille Pizzuto & his dad was Carl McCarthy. His parents were the greatest & he had the best of two worlds... View Obituary & Service Information

The family of John C. McCarthy Sr. created this Life Tributes page to make it easy to share your memories.

Send flowers to the McCarthy family.