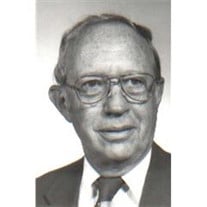 John L. (Jack) Rourke of Camillus passed away Tuesday, September 12th. He was born in Saugerties, NY on July 4, 1919. After graduating from Saugerties High School, and later from SUNY Canton, with a degree in Industrial Chemistry, he did graduate work at Syracuse University, Colgate, and the Harvard Business School. Jack worked 55 years, starting as a chemist for the Solvay Process Company in Solvay, NY (which after a number of mergers became Honeywell International Corp.) and then in various management positions, eventually retiring as their Technology Manager after they closed the plant in Solvay in 1995. He also held various technical and managerial positions in Kings Mountain, NC, and Moundsville, WV. He spent the war years at Solvay’s North Carolina Plant as their plant chemist extracting a mineral containing the metal Lithium which was vital to the war effort for use in the batteries of submarines and later in the Hydrogen bomb. A former member of the American Chemical Society, Jack was a charter member and director of the Iroquois Chapter of Trout Unlimited and the National Rifle Association. He was an ardent fly fisherman and avid hunter. He was a communicant of St. Joseph’s Catholic Church in Camillus. Jack was predeceased by his wife Ruth in 1984; a son Michael B. Rourke, and grandson Michael John Rourke. He is survived by three children: John L. (Larry) Rourke III of Honeoye, NY; Cheryl R. Weiler of Macungie, PA; and Kathleen E. Rourke of Trumansburg, NY; 4 granddaughters; and 7 great grandchildren. Calling hours are 6-8 PM Friday at B.L. Bush & Sons, 10 Genesee St, Camillus. The funeral Mass will be 10 AM Saturday at St. Jospeh’s Church. Burial will be in St. Mary’s Cemetery, DeWitt. Contributions may be made to the American Cancer Society, Box 7, E. Syracuse, NY 13057. Please sign the guestbook on www.BLBUSH.com

John L. (Jack) Rourke of Camillus passed away Tuesday, September 12th. He was born in Saugerties, NY on July 4, 1919. After graduating from Saugerties High School, and later from SUNY Canton, with a degree in Industrial Chemistry, he did graduate... View Obituary & Service Information

The family of John L. Rourke created this Life Tributes page to make it easy to share your memories.

Send flowers to the Rourke family.