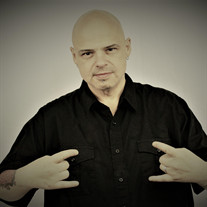 Kent R. Proctor, 50, of Lakeland passed away unexpectedly on Monday, October 29th at St. Joseph’s Hospital. He was born in Oswego, NY, and attended G. Ray Bodley High School in Fulton. Bear, as he was known, was a local musician, vocalist and drummer for the last 30 years. His parents, the late Richard and Dixie Proctor, were performers in CNY for years and had him on stage singing with his brother at seven years old. At the age of 11, he started marching in drum corps, and continued from 1979 till 1988. He learned to love the drums and received extensive training, going on to teach marching band for several local high schools in his limited spare time. His parents were inducted into the Oswego Music Hall of Fame on Kent’s 50th Birthday last Sunday and Kent performed and accepted the award. He played in several bands not limited to Decree, F5, Kyote Band, Midnight Hour, performing on both drums and lead vocals. In 2003, he switched to lead vocals for CNY area band F5. Kent’s musical inspirations were his parents Richard & Dixie Proctor, Aunt Lori McCann, Neil Peart, and Rush (his all-time favorite band). Kent was the passionate founder of PEP (Proctor Entertainment Project) performing as lead vocalist. For the last few years, he also loved to drive Bus for the Solvay School District where the kids could always count on him to sing with the radio. Before that was a manger for Sutherland Global services on ATT program. He was an alumnus of the Fulton Gauchos, the Cadets of CNY, and the Rochester Northmen Junior Drum and Bugle Corps. Kent played all over CNY, especially Syracuse and Oswego, with the full Band PEP and PEP Trio. He performed old standards and the classics from country to rock. Proctor Entertainment specialize in weddings and over last five years Kent DJ over 275 weddings himself all over NYS. He was very excited to debut next month a new project called Rotten Bonnie. He loved his sports, SU basketball, Detroit Lions Football and Yankees Baseball all while hanging out with his dog, Bailey. He is survived by his wife Jessica (Bailey) Proctor, his sons Gabriel Proctor, Noah and Jack McLean; his brother Richard (Gordon Quackenbush) Proctor, Jr. of Oswego, two nieces; two uncles and many cousins. Calling hours are 4 to 8 pm, Friday, November 2nd at B.L. Bush & Sons Funeral Home, 10 Genesee St. in Village of Camillus. Services will be 12 Noon Saturday at Christ Community Church, 3644 Warners Rd, Syracuse, NY 13209. Private burial will be held in Belle Isle Cemetery, Camillus. Contributions in lieu of flowers may be made to Solvay Dollars for Scholars, c/o Kevin Riley, 400 Spencer St, Syracuse, NY 13204. Donations will benefit music scholarships. Please sign his guestbook at www.BLBUSH.com

Kent R. Proctor, 50, of Lakeland passed away unexpectedly on Monday, October 29th at St. Joseph&#8217;s Hospital. He was born in Oswego, NY, and attended G. Ray Bodley High School in Fulton. Bear, as he was known, was a local musician, vocalist... View Obituary & Service Information

The family of Kent R. Proctor created this Life Tributes page to make it easy to share your memories.

Kent R. Proctor, 50, of Lakeland passed away unexpectedly on...

Send flowers to the Proctor family.