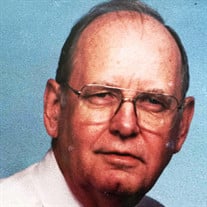 Paul Richards Palmer was born to George and Ethel Palmer on the family farm in Washington Mills, NY on June 21, 1927. He passed away peacefully on March 27, 2016 at St. Camillus Health Center in Syracuse, NY. Paul worked arduously in pursuit of his goals supported by his family. He will be greatly missed by family, friends, colleagues and all whose lives he touched in so many ways. Paul was a 1945 graduate of Chadwicks High School in Chadwicks, NY. With a work ethic instilled by hours working the farm and inspiration from his local family doctor to pursue a career in medicine, he attended Union College. He majored in Biology and Psychology and became his family’s first college graduate in 1949 before joining the US Army and serving in the first MASH unit. Paul and his beloved Peggy Roberts married on June 9, 1951. Paul graduated from New York Medical College in 1954. Residency training in Family Practice at Upstate and St. Joseph’s hospital brought the family to Syracuse. In 1957, he and Dr. Eugene Bluto founded Bluto and Palmer PC in Camillus, which later became Family Care Medical Group. Realizing a service gap in the continuum of care in the community, Dr. Palmer was a co-founder of St. Camillus in 1969. He retired from full-time practice in 1994. Throughout his distinguished career, Dr. Palmer was a serious, comprehensive, determined, compassionate care-giver and advocate for his patients in many ways representing the prototypical Family Doctor who made house calls with his “little black bag” always nearby. He was passionate about education and spent countless hours teaching and mentoring undergraduates, medical students and residents. He directed Family Medicine Resident Education at Community hospital for nearly thirty years and served as a volunteer clinical faculty member at SUNY Upstate teaching medical students his entire career. He often said that having a student in the office added two hours of work but that these were the most meaningful hours of the day. Dr. Palmer was honored as the NYS Family Practice Doctor of the year in 1985 and the NYS Academy of Family Physicians Educator of the Year in 1996. He served on various committees at SUNY Upstate through the years, the most rewarding of which was his time on the Medical School admissions committee. In 1992, he was awarded the SUNY President’s award for volunteer faculty. Dr. Palmer was active with the Onondaga County Medical Society as well as both the NYS and American Academies of Family Physicians he served as Acting Medical Director of Community General Hospital in the late 1990’s. He also volunteered at clinics throughout CNY. Most of all, Dr. Palmer cherished his unofficial work as advocate for, mentor to and friend of scores of students and young physicians throughout his career and into his retirement. Above all, Paul was a devoted husband, father, uncle and friend to many. Even with the demands of his career he never missed a game, concert or activity his children were participating in. Paul was active in his faith community as a member of Camillus Baptist Church and later Fairmont Community Church, United Church of Christ serving in multiple positions of leadership. His most precious moments were spent with his family around the dinner table, at Otisco Lake or in Fort Meyers Beach, FL. His enthusiasm for all Syracuse University sports was omnipresent, he never missed an opportunity to don the Orange gear and was a football and basketball season ticket holder for decades. Paul was predeceased by his parents and his older brother George. His adoring wife of 64 years, Peggy, predeceased him in August 2015. He is survived by a large loving family and lasting legacy including their three children Tracey and George Carruth of Syracuse, Susan Grady of Newburyport, MA and Paul and Kathy Palmer of Mendon, NY. He was Papa to seven grandchildren and four great-grandchildren, Catherine Carruth, Bryant and Kate Carruth, Erin and Jordan Hathaway, Brendan Palmer, Chris and Rachel Grady, Jared (Wendy Marone) Palmer, Kelly Palmer, Jack, Will and Abigail Carruth and J. Hunter Hathaway. He is further survived by special loved ones Juan and Terry Becerra and family, many friends, cousins, nieces, nephews and in-laws. Paul’s family wishes to thank the very caring and compassionate caregivers at St. Camillus and Central NY Hospice for their respect for human dignity and kindness. Friends may call on Thursday May 5, 2016 from 2 to 4 and 6 to 8 pm at B. L. Bush and Sons Funeral Home, Camillus, NY. Funeral services will be held at Fairmont Community Church on Friday May 6, 2016 at 10:30 am. Burial will be private at Maplewood Cemetery in Camillus. The family requests, if you care to make a donation, that it be in Paul’s name to the Dr. Paul R. Palmer Scholarship in Family Practice Fund # 662 at the Upstate Foundation, Inc. 750 E. Adams Street, CAB 326 Syracuse, NY 13210 or Fairmont Community Church, 4801 West Genesee Street, Syracuse, NY 13219. Please sign the guestbook at www.BLBUSH.com

Paul Richards Palmer was born to George and Ethel Palmer on the family farm in Washington Mills, NY on June 21, 1927. He passed away peacefully on March 27, 2016 at St. Camillus Health Center in Syracuse, NY. Paul worked arduously in pursuit... View Obituary & Service Information

The family of Dr. Paul R. Palmer created this Life Tributes page to make it easy to share your memories.

Paul Richards Palmer was born to George and Ethel Palmer on the...

Send flowers to the Palmer family.