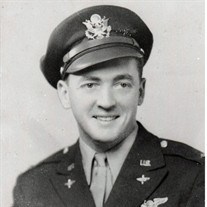 Ralph H. Sims, Jr., 98, of Warners passed away on Tuesday. Born in Belle Isle, NY, he graduated Valedictorian from Warners High School in 1938. Ralph enlisted in the military and served as a lead navigator flying B17 bomber planes with the 8th Air Force Division, based in England during World War II. Although 28 missions were the requirement, Ralph and his crew flew 32 missions, earning them the Distinguished Flying Cross, an Air Medal with 3 clusters and a Presidential Citation signed by Franklin D. Roosevelt. He was also credited with single handedly shooting down 2 enemy planes during the D-Day Operation. In 1941, Ralph met and married the former Margaret Valerio (also an Army veteran). In 1947, Ralph took a position as a security patrolman with the Carrier Corporation and for the next 35 years, steadily advanced himself to Fire Marshall and Chief of Security. He retired in 1982. Having family roots in Camillus, Warners and the Amboy-Belle Isle areas as far back as 200 years, Ralph took to local history like a moth to a flame. After retirement, he began interviewing long-time residents of the area about their family lives and recollections of the changes and developments throughout the towns. Every Sunday night, he would sit at his kitchen table and write their stories. Many of these stories (approximately 152) were printed under Ralph’s byline in the Camillus Advocate from 1994 until 2002. He also went on to publish two books, “The Sims Legacy” and “The History of Camillus”. Ralph’s knowledge of the town and its history made him a much requested guest speaker for many local organizations and schools. It was around this time that he co-founded the present-day Camillus Historical Society. In 1994, the newly formed society and all of its members were declared the official historians of the town. He received the “Citizen of the Year” Awards from both the Camillus Chamber of Commerce and the Camillus Historical Society in 1999-2000. In addition, he received numerous other awards from a variety of local organizations for his tireless dedication to the research and preservation of the true history of Camillus. He is survived by his wife of 76 years, Margaret Sims of Warners; sons Patrick (Nadia) of Navarre, Florida, Steven of Warners and Michael (Mary) of Syracuse; daughter Kathleen (Konrad) Perlman of Washington, D.C.; six grandchildren; three step grandchildren, seven great-grandchildren; one great-great grandchild; sisters Shirley Webster of Long Island and Janet Darrow of Camillus; and numerous nieces and nephews. Calling hours will be Saturday, January 26th from 10 am to 12 with a memorial service to follow at 12 Noon at the Amboy Belle Isle United Church, 6192 Airport Road, Syracuse. Arrangements by B.L. Bush & Sons Funeral Home, Camillus. Contributions may be made to the Amboy Belle Isle United Church or the Camillus Historical Society, 4600 West Genesee St., Syracuse, NY 13219. Please sign his guestbook at www.BLBUSH.com

Ralph H. Sims, Jr., 98, of Warners passed away on Tuesday. Born in Belle Isle, NY, he graduated Valedictorian from Warners High School in 1938. Ralph enlisted in the military and served as a lead navigator flying B17 bomber planes with the... View Obituary & Service Information

The family of Ralph H. Sims Jr. created this Life Tributes page to make it easy to share your memories.

Send flowers to the Sims family.