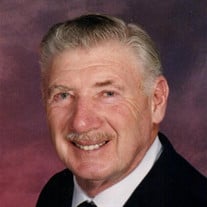 Walter D. Copeland, Sr., 81 of Camillus, passed away peacefully on October 20, 2015 at home with his loving family at his side. Walt had been bravely fighting cancer for over two years before succumbing to the illness. Walt was a banker for his entire career at Marine Midland Bank NA/HSBC. Born on March 11, 1934 in Schenectady, NY. Walt was the only child of Philip and Eva Copeland. He attended Albany High School where he played football. He attended Cornell University where he also played on the football team. Following this he joined the US Army and served from 1953 to 1955. He began in banking in 1955 where he met the love of his life, Connie, and they married in May, 1957. In 1959 he moved to the Bank’s Mortgage Department where he trained and subsequently managed Loan Administration. As the years continued, Walt was promoted in 1963 to a Junior Officer and handled commercial, construction and residential financing. In 1968 he was promoted to Assistant Vice President and was assigned to Marine Midland Realty Credit to work with commercial construction and permanent mortgage placements. Again in 1972 he was promoted to Vice President in charge of the Commercial and Construction Loan Department for the central region of the bank. In 1974 his career went national when he was promoted to Executive Vice President in charge of Marine Midland Mortgage Company and the Meairs Company, an Irvine California Mortgage Banking Company, a subsidiary of Marine Midland Bank and the promotions continued. In 1976 he was promoted to Vice President and Senior Mortgage Officer in charge of the consolidated Midstate Region Mortgage Department, with responsibility for construction, residential and commercial mortgage loans, as well as loan administration. This department included offices in Syracuse, Binghamton, Watertown and Utica. In 1981 Walt was selected as Vice President and District Manager, heading up the newly formed Construction Loan Department of Marine Midland Banks, NA covering all of Upstate New York reporting directly at the bank’s corporate headquarters in Buffalo and New York. He was now responsible for hundreds of millions of dollars in outstanding loans and commitments. In 1989, after 34 years of mortgage and construction financing experience and financing a number of the largest commercial projects in Upstate New York, he retired from banking and formed the Walter D. Copeland Organization Inc., his own real estate consulting/commercial mortgage placement business and later retired a second time. He was involved in an extensive number of professional organizations including Board of Director positions at Skaneateles Bancorp/Center Banks, the Advisory Board of TICOR, Director and a past President of the Syracuse Builders Exchange, Delegate to the Building Industry Employers of New York State, member of the Syracuse Economic Development Corp. Loan Committee, President of the Central New York Mortgage Bankers Association, President of the Society of Real Estate Appraisers Upstate Chapter, designated member of the Appraisal Institute (SRA). In retirement he was President of the Pennsylvania Club in Clearwater, FL, his winter residence. He was a member of St. Josephs Church in Camillus, NY His wife, children, grandchildren and a great grandchild were his greatest interests and their great memories of him will sustain them for the rest of their lives. He is survived by his beloved wife of 58 years, Connie and by his two children, Walter D., Jr. (Lucy H.) And M. Denise Slade (Ron) and seven very loved grandchildren: Jennifer (Terry) Musho, W. David (Mariesa) Copeland, III, Matthew S. Slade (fiancé Faith), Joseph E. Copeland, Katie Slade, Daniel Slade and Elisabeth M. Copeland as well as his first great grandchild, Malachi David Copeland. Walt was known all his life as a kind, compassionate person who always put others first. His charity to everyone, especially to those often ignored by others, was what set him apart. All who really knew him also understood this. It just came naturally. Services will be private for his immediate family as per his wishes at St. Joseph’s Church in Camillus. He will be laid to final rest with military honors in Assumption Cemetery. Contributions in memory of Walter may be made to Golisano Children's Hospital, CAB Room 326, 750 E. Adams St, Syracuse, NY 13210. https://www.foundationforupstate.org/gchdonate Arrangements by B.L. Bush & Sons Funeral Home, Camillus. Please sign the guestbook at www.BLBUSH.com

Walter D. Copeland, Sr., 81 of Camillus, passed away peacefully on October 20, 2015 at home with his loving family at his side. Walt had been bravely fighting cancer for over two years before succumbing to the illness. Walt was a banker for... View Obituary & Service Information

The family of Walter D. Copeland Sr. created this Life Tributes page to make it easy to share your memories.

Send flowers to the Copeland family.