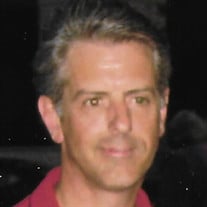 William H. Schmutzler, 56, of Camillus, passed away unexpectedly at his home on Monday. Bill was born in Syracuse, and grew up in Camillus. He was a graduate of West Genesee High School and Syracuse University, where he obtained a degree in Communications and Management. Bill worked for many years as a disc jockey and announcer on radio and in entertainment clubs in Syracuse, Dallas and Denver, and in later years provided entertainment at weddings and private parties. He utilized his announcing skills most recently as the public address announcer at Skaneateles scholastic football games. In addition to his career as a disc jockey and announcer, he worked as a sales consultant for QOSS Consulting LLC, Lujan USA, and Pete Kitts Automotive Sales and Service. Bill also particularly enjoyed working as a referee for youth basketball and as an umpire for little league baseball games. He was many patrons’ favorite bartender at the Inn Between and Green Gate Inn in Camillus. When he wasn’t working, Bill enjoyed boating on Skaneateles Lake, water skiing, snowmobiling and spending time with family and friends. He loved listening to music, watching music videos and going to concerts. He was devoted to his dogs, Bella, Milo and especially Chloe. Maybe most of all, he enjoyed rooting for and agonizing over SU sports. Bill was predeceased by his beloved sister Patty. He is survived by his parents, Lester F. and Ann M. Schmutzler, of Camillus; his brother Thomas (Erminie Izzo) Schmutzler of Rochester; his sister Susan (Thomas) Smith of Syracuse, his step daughters Nicole Dempsey and Marissa Dempsey, and nieces and nephews J.P. Geiss, Gianna Geiss, Greggory Geiss, Helen Ann Schmutzler, Stephen Schmutzler, Alexandra Smith and Timothy Smith. Calling hours will be Sunday, April 10th from 1 to 4 at B.L. Bush & Sons, 10 Genesee St, Camillus. Services will be held Monday, 10:30 am at Fairmount Community Church, 4801 W. Genesee St, (corner of Whedon Road) Syracuse. Burial will be in Greenlawn Cemetery, Warners. Bill spent many hours assisting his mother cope with diabetes. Contributions may be made in honor of Bill to the American Diabetes Association, 2nd Fl, 6390 Fly Road, East Syracuse, NY 13057 . http://www.diabetes.org/in-my-community/local-offices/syracuse-new-york/ Please sign the guestbook at www.BLBUSH.com

William H. Schmutzler, 56, of Camillus, passed away unexpectedly at his home on Monday. Bill was born in Syracuse, and grew up in Camillus. He was a graduate of West Genesee High School and Syracuse University, where he obtained a degree in... View Obituary & Service Information

The family of William H. Schmutzler created this Life Tributes page to make it easy to share your memories.

Send flowers to the Schmutzler family.